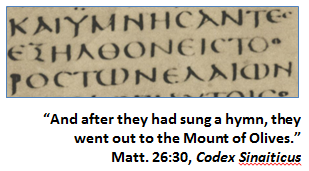 I contributed a piece as part of a recent effort to connect the body of psalms known as the Egyptian Hallel to modern Christian worship:

The psalter has presented readers with a multitude of ways to divide, categorize, and sort its collection of songs, poems, prayers, and hymns, but one of the oldest classifications is the small subgroup known as the hallēl psalms.  The term hallēl  is a Hebrew classification derived from a word meaning “to praise” or “to cheer.”

These psalms have a long tradition in both Jewish and Christian liturgical practice.  Among the more frequently used of the Hallel are the “Egyptian Hallel” (Psalms 113-118), so-named because of the description of the Exodus in Psalm 114 and their connection with the Passover Seder meal. It is interesting to point out that the Greek translation of these psalms all begin with the Greek transcription of the Hebrew verb allelouia meaning “praise the Lord,” even though the Hebrew word is only present in the Psalms 113.[2]  This addition in the Greek translation of these psalms indicates that they were understood to comprise a subcategory already at an early stage of the development of the Psalter.