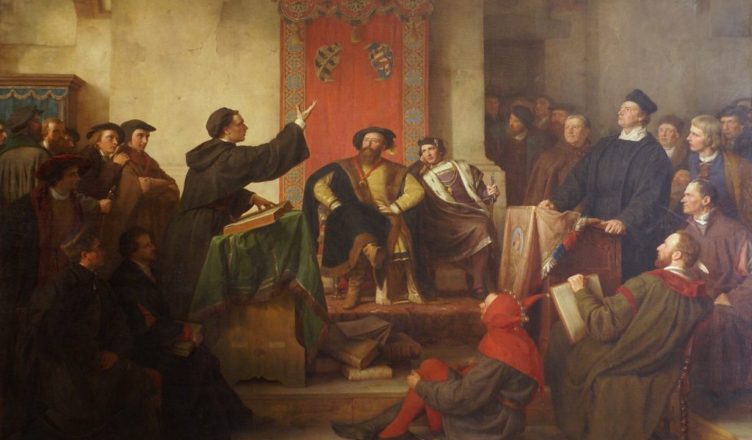 Over at Reformation21 I have a post on the importance of the authority of the Scriptures for Martin Luther and the consequential importance of their availability to human. Luther went to great pains to get the biblical translations into as many hands as possible, even when it meant offending his own literary and humanistic sensibilities.

In the years 1518–1519, the Leipzig Debates were called and conducted between Johann Eck and Martin Luther, among others, in Pleissenburg Castle in Leipzig Germany. At the time, Luther would have presented the latest instance of the annoying humanists and reformers who seemed to be popping up across the theological landscape over the previous century.

Inspired by the classicalism of the Renaissance, and a general humanistic desire to original sources, innovative scholars had made headway into the study and interpretation of the biblical texts. New grammars of Hebrew, like the one published by Johann Reuchlin in 1506, modeled on the great Rabbi David Kimchi’s grammatical work, opened up the Hebrew text to interpreters who previously had to go to great lengths to learn the ancient language for themselves.

In the midst of the renewal of interest in the original texts, Europe experienced a vast democratization of knowledge happening at every level of society, inspired further by the invention of the printing press in the fifteenth century. The significance of the printing press matched that of other leaps in informational technology like the alphabet in the late second millennium B.C., the codex around the time of Christ, and the internet in recent years. This new access to printed material fundamentally shifted intellectual discourse across the disciplines.

Interest and access to primary sources, including those of Scripture, fueled a theological awakening that questioned some of the most entrenched political and ecclesiastical power structures of its day.

This ideological revolution loomed in the background of the Leipzig Debates, particularly as it pertained to the authority of the Pope as head of the church and arbiter of Christian doctrine. It was a grand confrontation; think William Jennings Bryant vs. Clarence Darrow, but with habit and cowl. The two met on July 4 to commence debate. One attendee, the humanist Peter Mosellanus, described the two opponents in vivid detail. For Luther: “Martin is of medium height; his body is slender, emaciated by cares and study; one can count almost all the bones; he stands in the prime of his age; his voice sounds clear and distinct.” How did Eck appear? “He has a huge square body, a full strong voice coming from his chest, fit for a tragic actor or a town crier, and more harsh than distinct; his mouth, eyes, and whole aspect give one the idea of a butcher or a rude soldier rather than of a theologian.”1

For Eck, the debates substantivized the charge of heresy against Luther, because Luther admitted that he sympathized with the opinions of the followers of Jan Hus who had already been condemned by the church as a heretic. For Luther, the debates helped him clarify the raison d’etre of his early and fervent opposition to certain Roman doctrines. He was not merely dissatisfied with ecclesiastical corruption or errors made by the church authorities. Rather, his was a difference on the issue of authority itself, where it lay and what that meant for the world.

In the next year later, Luther would write, “But that we fight not with our own words, let us bring forth the Scriptures.” His doctrine of biblical authority had developed further. Everyone, including the church leadership, should be held accountable by the teaching of scripture. To illustrate the point, Luther proposed a hypothetical situation of ecclesiastical corruption, and drew counsel from two biblical passages in which the authority of God’s word trumps other hierarchies. He writes,

“If it were to happen that the pope and his cohorts were wicked and not true Christians, were not taught by God and were without understanding, and at the same time some obscure person had a right understanding, why should the people not follow the obscure man? Has not the pope erred many times? Who would help Christendom when the pope erred if we did not have somebody we could trust more than him, somebody who had the Scriptures on his side.”