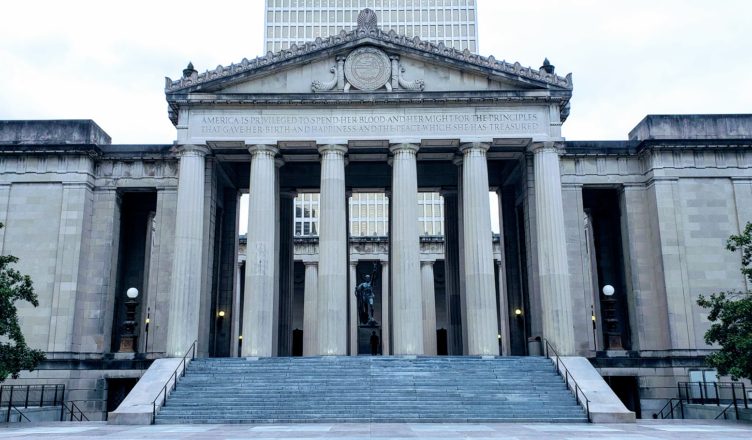 The following began as a short homily delivered at the prayer breakfast of a local Air Force Base this past spring. It has been adapted for this forum. I like the piece because it speaks to my childhood as the son of a Naval officer but also because it forced me to think through how to express a biblical idea to a religiously diverse audience without giving up the core of the biblical faith or stumbling into civil religion.

I grew up as a military dependent, I feel a certain measure of familiarity with a gathering of members of our nation’s armed services. I might point out that my maternal grandfather and my uncle were both naval aviators and veterans of WWII and Korea and Vietnam respectively.

All that is to say that I feel a certain warmth and solidarity now on a military base, like so many of the bases I grew up on, that distinct but familiar smell of ten layers of paint, axle grease, and patriotism.

My father grew up in a small town called Sidney, IA, population just north of 1000. I remember him telling me about a time when he returned home and was walking around the park at the town center when he ran into an elderly many who stopped him with his hand and stared at him for a moment before asking, “Aren’t you John’s boy?” That was usually how it went. Here he was a senior officer in the US Navy, but in his hometown, he was first and foremost “John’s boy.” My grandfather John Redd was the county attorney in the old days and known widely around the town.

For members of the military, forget about your branch of the service, your specialty, your rank: you are in the service. You serve. That is how they think of you. Those who have given it much thought. You hear it in the airports and gas stations and perhaps even on the Washington, D.C. metro. “Thank you for serving.”

There is an innate human impulse to serve. It is built into us, hardwired, a vague sense of the need to care for and help others. For those of the biblical faith, we say that all humans are created in the image of God and that that image bestows on us a dignity, a sense of meaning, that can seem inexplicable, inscrutable, even elusive at times.

It can seem elusive because our own sense of service can be easily derailed by self-absorption and our competing desire for comfort, convenience, and security. That is why, as you know better than many of the citizens you aim to protect, service must be honed by discipline and resolve. The desire to serve may come naturally, but the power to effectively serve requires personal formation. Hence the training that members of the military have to undergo.

In the Biblical book of Deuteronomy, which is really just a grand national pep rally for the nation of Israel, we learn about the dynamics of service.

And these words that I command you today shall be on your heart.
You shall teach them diligently to your children, and shall talk of them when you sit in your house, and when you walk by the way, and when you lie down, and when you rise.
You shall bind them as a sign on your hand, and they shall be as frontlets between your eyes.
You shall write them on the doorposts of your house and on your gates.
(Deut 6:4-9)

In other words, true service comes from within.

But what do we do with the competing, conflicting desire? What if when we turn inward and we find that our inner selves, what Deuteronomy calls “the heart” are distracted by selfish desires for self-comfort, convenience, and security.

I don’t think that anyone who has given it much thought would say that when he or she looks inside, into his or her heart, that they like what they see 100% of the time. When we consider ourselves, if we are honest, we find that much of what drives us is selfish and ultimately oppressive if not checked by our own sense of justice, social pressure, and yes discipline.

Aleksandr Solzhenitsyn was Russian dissident and author, a political prisoner in the Soviet Union’s gulags for over a decade, who won the Nobel Prize for literature in 1970 after he had been freed and emigrated to the west. When he reflected on the terrible oppression of the Gulag system in the USSR, he came to the realization that evil, oppression, radical selfishness is not an exotic import. Rather it is a mundane commodity, hardly scarce, and available to all.

“If only it were all so simple! If only there were evil people somewhere insidiously committing evil deeds, and it were necessary only to separate them from the rest of us and destroy them. But the line dividing good and evil cuts through the heart of every human being. And who is willing to destroy a piece of his own heart?” (Aleksandr Solzhenitsyn, The Gulag Archipelago 1918-1956)

Prayer is that act that acknowledges our need for help to overcome self-importance, the recognition that self-aggrandizement is not merely wrong-headed, it is a delusion. Prayer moves our hearts and minds beyond the immanent frame, the here and now, the physical and perceptible, to the transcendent frame, that which is truly beyond us, in order to save us and empower us for service.

Prayer says that this world before me is not all that there is. That the sense of meaning that we perceive all around us in our own cultural artifacts like love, family, art, sport, freedom, dignity.

In the Christian tradition, the prayer of faith is evidence of the heart that has been rescued from the quagmire of self-worship and directed toward the worship of God.

The Apostle Paul speaks of Jesus Christ as dwelling within the believer through the Holy Spirit by faith. By this spiritual indwelling, the heart of the Christian believer is reoriented toward God and as a result, reoriented toward service to others. In the second chapter of Paul’s letter to the Philippians offers a powerful reminder that it was out of love that Christ humbled himself to death on the cross in the service of others. Paul goes on to say that if you are a follower of Jesus, you should begin to live like Jesus. Like him, we should humble ourselves serve others out of love.

There is a sacrifice that comes with service, even in the form of military service. Those in the service have sacrificed. Perhaps it is that lucrative career you didn’t pursue, that MBA or law degree you didn’t get, perhaps it is the moving your family from town to town, uprooting your kids from their friends and familiar setting. Perhaps it is the long deployments away from your loved ones.

You had to humble yourself to this service.

But it is good that we stop for a moment and reflect on prayer and the work of faith, because it is in that context that we are reminded that our service is not a mere blip in the random warp and weft of the universe, but rather that our service has meaning; it is of value in the universe. Prayer reminds us that perhaps even the Creator God acknowledges our service as the outworking of our being made in his image. The book of Deuteronomy points to how faith works. What starts in the heart emanates out into the world. For true faith, the heart is not a cul-de-sac, it is a highway to those in need around the world.

In short, faith does work, and the work it does is the work of service.

For more on the application of Deut. 6:4-9 in the Christian life, pick up a copy of my book The Wholeness Imperative.