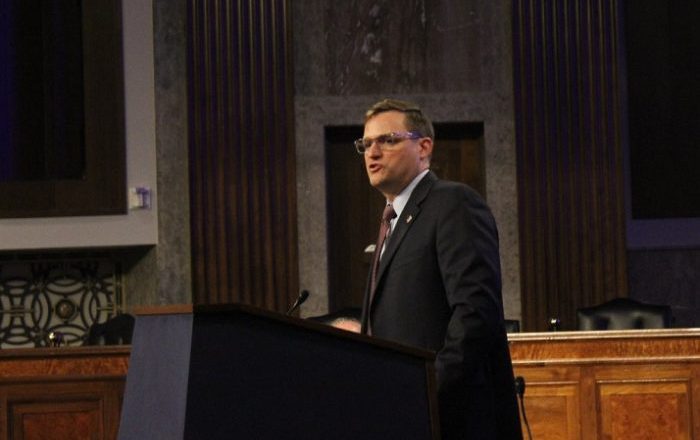 I was privileged to participate in a conference on the persecuted church hosted by the Institute on Religion & Democracy at the Dirksen Senate building on Capitol Hill. IRD brought together an impressive lineup of voices including IRD president Mark Tooley, Rep. Frank Wolf, Ambassador-at-large Sam Brownback, CANA Missionary Bishop Julian Dobbs, and pastor Dominic Sputo. During the conference, I gave a talk that began as a sort of biblical theology of Christian persecution but ended up focussing on the solidarity of the faithful with their fellow church members who suffer and the larger union that we have with one another “in Christ.”

Here is a video of the talk and the text below:

Christians must struggle energetically to bring relief to the church suffering persecution while recognizing that persecution is indeed constituent of the life of Christian faith. In other words, we should approach persecution with a sort of bifocal perspective. On the one hand, we are, contrary to Cain’s protestations, our brother’s and sister’s keeper, and we owe to them not only our prayer but our actions on their behalf. On the other hand, we recognize that the life of the follower of Jesus Christ is ordained by God to be one of persecution and sorrows, following the life and death and resurrection of the Savior who came before us. Our Lord reminds, “‘A servant is not greater than his master.’ If they persecuted me, they will also persecute you” (John 15:20)

Solidarity with The Body

First, let us consider solidarity with the members of the body. Not much time needed to pass after the fall of humanity before persecution and martyrdom enter the picture. Cain’s jealous murder of his brother Abel after Abel’s righteous offering of the best of his flocks is an immediate and pure example of true faith leading to persecution and indeed martyrdom. Having encountered brutal persecution himself, the apostle John evokes the memory of Abel’s death as just that, an act of martyrdom, drawing a conclusion for Christians of his day, “Do not be surprised, brothers, that the world hates you” (1 John 3:12).

In the Hebrew Bible, the persecution and martyrdom of followers of the Lord are presented as an expected outcome for anyone audacious enough to proclaim the truth about God. Persecution of the faithful is on display throughout the ancient text, where we read of Israel’s suffering in the hands of their Egyptian slavers, Canaanite oppression of the tribes during the time of the judges, Samuel’s fear of reprisals from Saul, and Elijah’s and Elisha’s rejection by their own king and countrymen because they spoke the word of the Lord. In Elijah’s day things had gotten so bad, that the 7,000 prophets who had not given in to the Baal-worshiping sensibilities of their day had to hide lest they be found and persecuted (1 Kings 19:18). The canonical prophets were persecuted in their day. Jeremiah is mocked and imprisoned for his inconvenient truths, Daniel and his Judahite friends suffer fits of rage from their kings, imprisonment, and two unsuccessful executions because of their faith in the Lord.

The author of the New Testament letter to the Hebrews memorializes these martyrs, writing “…others suffered mocking and flogging, and even chains and imprisonment. They were stoned, they were sawn in two [referring to an extrabiblical account that Isaiah was martyred in this way], they were killed with the sword. They went about in skins of sheep and goats, destitute, afflicted, mistreated— [those] of whom the world was not worthy—wandering about in deserts and mountains, and in dens and caves of the earth” (Heb 11:36–38).