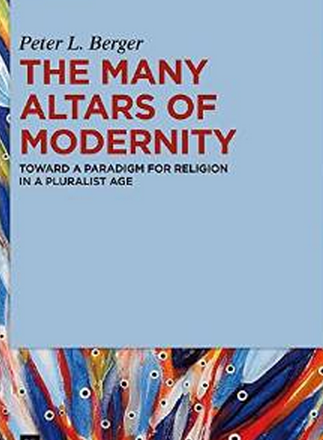 The accomplished sociologist of religion Peter Berger has a new book entitled The Many Altars of Modernity, and a related blog post, in which he argues that secularization does not offer the best description of current trends in global religious observance and affiliation. According to Berger, secularization is primarily a creature of the West and has achieved varying levels of purchase even there (think Sweden vs. Texas).  Rather, he argues, the more viable theory is pluralization, the reality that faith cannot be taken for granted but is merely one conscious choice among many.

There is an underlying assumption here, shared by religious conservatives and their progressive antagonists (they just differ on what to do about it), and indeed (still) widespread both in academic and popular assessments of the contemporary world: that modernity means a decline of religion and its concomitant morality. Without dissecting this concept any further, this is what is meant by the concept of secularization; for our purposes here we can mean by secularism the idea that secularization is not just a fact, but one to be applauded and promoted. But is it a basic fact of our age? It is certainly a fact; but is it the fact by which our age is to be defined? I think it is not. It is not equally dispersed globally–strongly so in Europe, not at all in Nepal, somewhere in between in Texas. However, what is much more universally dispersed is a fact mentioned by John Paul II in his address to the Latin American bishops: that “faith is no longer taken for granted”. Rather, faith must be based on an individual decision. 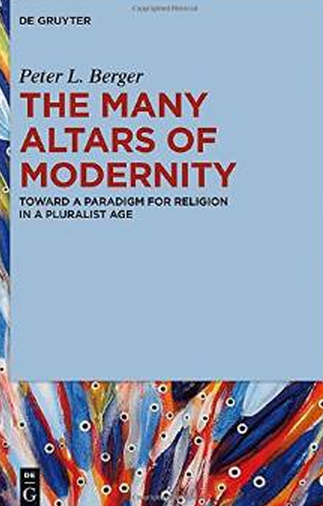 The Pope of course hoped that people would choose the Catholic Church, others chose Pentecostalism, or a relaxed agnosticism, or even a militant atheism. And this is why I think that it is not secularization but pluralism that is the clue to understanding the situation of religion in the contemporary world. What I, in collaboration with some colleagues, have been trying to develop is a theory of pluralism, to take the place of the secularization theory which used to be dominant when I started out as a sociologist of religion and which is now hard to maintain in the face of global religious turbulence.

Here are some key propositions of such a theory: eventually to provide a paradigm for religion in a pluralist age. (Of course I cannot develop the full argument here. If the idea tickles you, read my book. Some of it, I promise, is fun.)

Pluralism affects the faith of individuals, the character of religious institutions, and the way in which the state relates to religion. Therefore, the theory must span the psychological, institutional and political dimensions of the pluralist phenomenon. The individual lives with a diversity of worldviews and values, between which he must choose. Faith is no longer a matter of fate, but of decisions that may be reversed. It follows that religious certainty is hard to come by. Faith is typically tinged with doubt.

So far so good (though he goes on to offer an unnecessary criticism of the Reformed doctrine of sola fide). This revision does seem to corroborate with a general sense of the state of affairs we see emerging around the globe. Why the decline in numbers for Christians in the West? Because Christianity is no longer the unmarked religious affiliation in the West. It no longer pays to be a nominal Christian.

I am interested that Berger, however, still promotes a kind of secularization, but here the secular is merely the middle space in which adherents of different faith systems can meet and interact without violence or hostilities. This is a considerably depleted specimen, one that is marked by a thin pragmaticism.

Even a state that defines itself in strictly religious terms must leave space for the secular discourse if it wants to participate in the modern world. Saudi Arabia, while it makes sure that Islam governs every sector of society, cannot allow its pilots to fly airplanes according to sharia or its hospitals to consult fatwas while surgery is being performed. Religious freedom and some degree of separation between the state and religious institutions may be deemed to be morally desirable, but may also be functional for political stability—not a minor fringe benefit.

The movement from secularization theory to pluralization theory is not altogether new, but Berger clarifies the new arrangement rather well. I would add to his conclusion that religious systems that have a sophisticated and broad teaching on how to engage peaceably with those outside the religious community will fare particularly well in the pluralistic society.

Lastly and obviously, sociology can tell us where we are, but it can only make best guesses as to where we are going. Sociological conclusions are true until they are not (think the previous theory of secularization). History is too full of remarkable and unanticipated turns of event for us not to enter into this discourse with a strong dose of humility.

By the way, during my reading of the post, an ad for www.mormon.org popped up.