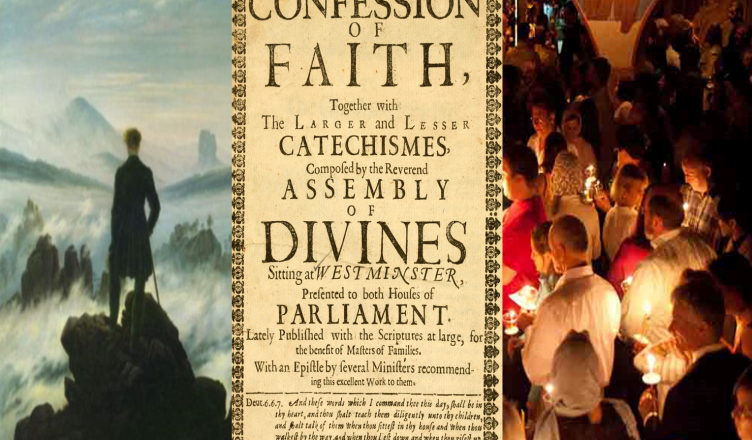 A year ago I attended a conference at Georgetown University in honor of the fiftieth anniversary of the Vatican II council. The conference, entitled “Remembering the Future,” drew an ecumenical group of presenters, respondents, and observers, including a colleague of mine who spoke to the unique opportunities for mutual service between Roman Catholics and the confessionally Reformed. The spirit of the conference was one of comity. We should be able to acknowledge serious doctrinal disagreements between Protestants and Catholics, but we should also be willing to admit where we share similar visions on a variety of issues.

Hearing these papers and intermingling with the crowd during breaks, I was struck by some surprising similarities and dissimilarities represented in these distinct expressions of the Christian church. The experience brought to mind my own church background, which I have referred to as “denominationally promiscuous,” and how I have made sense of it in my own life. Like many Christians in the modern world, my traditional background is comprised of a hodgepodge of influences, and I deliberately chose my current tradition, the Reformed position, somewhat later in life as a result of a personal spiritual experience mediated by the influence of family and friends.

So as I looked around that gathering in Georgetown, I saw something familiar with stages in my own autobiography. How should I understand these other Christian communities with which I have so much in common?

Here is the paradigm that has helped me understand the wide range of Christian expression in the world as well as the different modes of individual spiritual formation. Regardless of the denomination, there seem to be three modes of Christian formation: experience, doctrine, liturgy.† These three modes have proven true to my religious life, but they have also been borne out in conversations with friends, with remarkably little variation.

Each mode has a predominant virtue, realm of meaning, and objective.

For the experiential mode, the key virtue is spontaneity, the realm of meaning is feeling, and the objective is ecstasy, expressed in the sense of euphoria or relief that comes from worship of and surrender to the Lord through Jesus Christ. In the experiential mode, the personal encounter rises in estimation, marked by the authenticity of spontaneity, because planning and deliberation imply a scripted, insincere, and therefore false experience. Emotional response becomes the means by which encounters are evaluated, logic and rationality seem cold, and recital or participatory reading indicate that true faith has been abandoned for the outward appearance of devotion. Much of the religious life is marshaled to the cause of finding and nurturing the proper emotional response. Oftentimes emotion is synonymous with spirituality, as the presence of Holy Spirit is most present in personal feeling and intuition. Recently converted adults usually occupy the experiential mode for some period of time due to the power of their personal conversion experience.

In the doctrinal mode, the key virtue is organization and system, the realm of meaning is logic and syllogism, and the objective is clarity and certainty. For the doctrinalist, the system of belief, usually expressed in propositions, rises in estimation, particularly the individual’s ability to cite and connect doctrines in a way that reflects certain commitments (is the teaching biblical, covenantal, literal, subversive, charismatic, liberating?). Personal experience and relationship are not as important as a clear expression of the terms and meaning of belief, including the terms and meaning of experience. The Holy Spirit is most present in the interpretation of Holy Scripture. Those who are intrigued by the teachings of systematic and biblical theologies traffic heavily in the doctrinal mode.

In the liturgical mode, the predominant virtue is heritage, the realm of meaning is participation and performance (though this latter term is often used pejoratively), and the objective is belonging. For the liturgicalist, the community rises in estimation, particularly the communitarian modes of worship but not only those, also the identification as a group and participation in community activities like mercy ministries, public gatherings, and so on. Individual speculation and meditation on theological belief is not as important as appreciating and being subsumed in communitarian statement. The Holy Spirit is most present in community support and interaction. Admittedly, the liturgical mode finds broad expressions and need not be accompanied by a change in denomination or tradition, but there is a notable interest in corporate worship, sacrament, and shared confession. Individuals or groups who do not think they have liturgical resources of their own will adopt the liturgical resources of another group (think of conservative Presbyterians wearing vestments and employing the Book of Common Prayer in worship services, as well as observing the liturgical calendar). 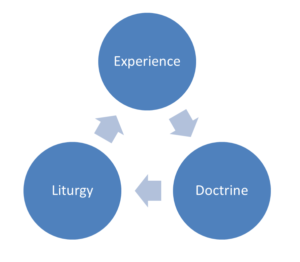 To a certain extent, these modes have a sequential quality to them, so that liturgy follows doctrine and doctrine follows experience. This sequence does not imply that a later mode is somehow more sophisticated or mature than the previous two, but there is a sense in which the weaknesses of the previous mode are complemented by the strengths of the later one, so that the later mode is usually perceived as a corrective. For instance, the system of doctrine has a way of correcting the capriciousness of experience, and the collective nature of community corrects the individualism inherent in intellectual pursuit of doctrine.

I would add that there is also a cyclical nature to the modes so that liturgy includes a strong experiential element. Doctrine can lead to liturgy, and liturgy can lead back to experience. The directionality of the modes, however, is rarely reversed. Those in the liturgical mode rarely revert the doctrinal mode unless first going through a season of new experience. Those in experiential mode rarely appreciate the forms of the liturgical mode without first having experience some engagement with doctrinal introspection.

Each mode is manifested in most religious communities. You can find experientialist, doctrinalist, and liturgicalist Presbyterians just as you can find all three among the Anglicans, Baptists, and Pentecostals. Certain denominations, however, do tend to emphasize one mode more effectively than the other two in their denominational cultures. Generally speaking, Baptists and Pentecostals have emphasized the experiential mode; the Presbyterian and Reformed have emphasized the doctrinal mode; and the Anglican, Roman Catholic, and Orthodox have emphasized the liturgical mode. As a result, among Protestants, one hears the common observation that goes something like this: the Baptists convert the believer, the Presbyterians train him, and the Anglicans bury him.

Speaking for my own tradition of conservative Presbyterianism, while doctrinalism receives the broadest support, there are large camps that secondarily emphasize experience (see the Sonship movement) as well as those that emphasize liturgy (some of those pursuing Reformed catholicity).

Engaging one mode without the others can lead to various dangerous, sometimes heretical, positions. Experience without doctrine or liturgy leads either to burnout, constantly trying to relive the personal experience, or to heresy motivated by the need to find new stimuli for experience. Mere experientialists often leave the faith early due to experience-fatigue and a lack of connection with the community of faith. Many of the most outspoken opponents of evangelical Christianity cite a highly experiential version of the faith. Once the experience has ceased, their faith does as well.

Doctrine without experience and liturgy is cold and individualistic. The mere doctrinalist often recedes back into isolation or the family group where the system of belief can be protected and honed for more certainty and clarity. Such isolation is often marked by arrogance and a sense of superiority due to being right on “the things that matter,” while love, joy,  fellowship, and evangelism are noticeably lacking.

Liturgy without experience and doctrine is lifeless and rote. The mere liturgicalist participates in corporate worship in the most superficial way, and that participation is infused with a sense of alienation from the actual power of the ritual. Because participation does not find purchase in inner experience, the inner experience of others, particularly the clergy, becomes an important validation and proxy of the liturgy.

Note again the cyclical nature. Awareness of the pitfalls of a particular mode often fuel the transition to the next mode. For instance, doctrinalists cite the shallow, capricious, and subjective nature of experientialism when they describe their conversion to doctrinalism. Likewise, liturgicalists cite the coldly rational, arrogant individualism of the doctrinalism when they justify their new found interest in liturgy. Experientialists (with churched backgrounds) regularly mention the alienation and rote participation of liturgy when they explain their conversion to, and often by, experience.  While the experience-doctrine-liturgy-experience… sequence can be reversed, such reversal is preciously rare.

By God’s grace, we ought to desire all three modes for the individual believer as well as the collective body of Christ. They all speak to true expressions of faith if recognized as complementary of each other. In the Scriptures, the three modes appear in certain exemplars, both positive and negative. For instance, Saul’s experience of Christ on the road to Damascus speaks to the power and validity of a personal encounter with the Lord Jesus Christ, but Thomas’ refusal to accept the reports of the resurrection until first personally verifying them speaks to experience’s short comings.

Even the canonical structure of the New Testament reflects these mode: the Gospels and Acts are taken up with the experience of the Son and the Spirit, the letters explore the depth of Christian doctrine, and Revelation provides a worship book filled with the liturgy of the eschatological and heavenly assembly.‡

Put in the best light, we need believers who are personally engaged with Christ, rooted in a system of belief that makes sense of the world, themselves, and God, and members of the community who are aware that they are collectively constitutive of the vibrant, whole body of Christ.

† As I was thinking about this, I realized that these three modes appear on the surface to correspond to Marsden’s three categories of Reformed Christian in America’ pietist, doctrinalist, and culturalist in his brief treatment entitled, “Reformed and American” in Reformed Theology in America: A History of Its Modern Development, ed. David F. Wells (Grand Rapids, Mich.: Eerdmans, 1985) 1-12. He, in turn, is borrowing “roughly” from Nicholas Wolterstorff’s categories (“The AACS in the CRC,” The Reformed Journal 24 [December 1974): 9-16). While Marsden and Wolterstorff are dealing with historically distinct traditions and are therefore bound by those communities’ self-reporting and self-identification, their categories do not necessarily fit the spiritual formation I am talking about here, though there may be some overlap. Pietists tend to prestige experience over other sources of meaning, and the doctrinalists have much in common with the distinct group of Marsden/Wolterstorff. You will find culturalists, however, in each of the modes mentioned above. The categories of Marsden/Wolterstorff are stable and those authors do not talk about significant movement between groups. Each of these modes is also roughly coincident with the three “perspectives” articulated by one of my former teachers and current colleague John Frame, though he uses a different terminology: subjective, normative, and situational. As with these perspectives, no mode should be placed in the prestiged position, but all bring different values and deficits with them. I find Frame’s perspectives to provide helpful classification of human knowledge, though they have been employed to reductionistic ends, to be sure. John Frame, The Doctrine of the Knowledge of God (Phillipsburg, N.J.: P&R, 1987).

‡ This last point was made by my wise and omnicompetent sister, Anne Chamberlin, during a conversation about the paradigm presented in this article. Her blog can be read here.