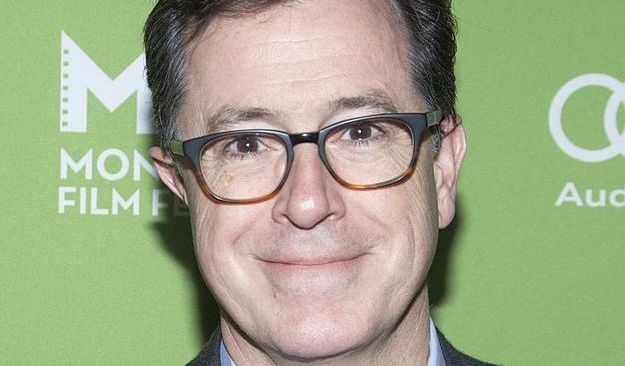 Stephen Colbert has been open about his Catholic faith before (here is a roundup; and that time he beat up on Bart Ehrman), and when he does talk about it, he can have a defensive, sometimes apologetic, posture that is understandable given the industry in which he operates. He whose business it is to entertain mustn’t risk alienating huge swaths of audience with ancillary issues like faith and religion.

His faith, however, is meaningful enough to him that he brings it up willingly in public from time to time, as he did in a recent GQ interview that is getting some attention from Christians in social media and elsewhere (see here).

In the interview, there is an extended section in which he talks about his faith, and I want to repost all of it here:

He lifted his arms as if to take in the office, the people working and laughing outside his door, the city and the sky, all of it. “And the world,” he said. “It’s so…lovely. I’m very grateful to be alive, even though I know a lot of dead people.” The urge to be grateful, he said, is not a function of his faith. It’s not “the Gospel tells us” and therefore we give thanks. It is what he has always felt: grateful to be alive. “And so that act, that impulse to be grateful, wants an object. That object I call God. Now, that could be many things. I was raised in a Catholic tradition. I’ll start there. That’s my context for my existence, is that I am here to know God, love God, serve God, that we might be happy with each other in this world and with Him in the next—the catechism. That makes a lot of sense to me. I got that from my mom. And my dad. And my siblings.”

He was tracing an arc on the table with his fingers and speaking with such deliberation and care. “I was left alone a lot after Dad and the boys died…. And it was just me and Mom for a long time,” he said. “And by her example am I not bitter. By her example. She was not. Broken, yes. Bitter, no.” Maybe, he said, she had to be that for him. He has said this before—that even in those days of unremitting grief, she drew on her faith that the only way to not be swallowed by sorrow, to in fact recognize that our sorrow is inseparable from our joy, is to always understand our suffering, ourselves, in the light of eternity. What is this in the light of eternity? Imagine being a parent so filled with your own pain, and yet still being able to pass that on to your son.

“It was a very healthy reciprocal acceptance of suffering,” he said. “Which does not mean being defeated by suffering. Acceptance is not defeat. Acceptance is just awareness.” He smiled in anticipation of the callback: “ ‘You gotta learn to love the bomb,’ ” he said. “Boy, did I have a bomb when I was 10. That was quite an explosion. And I learned to love it. So that’s why. Maybe, I don’t know. That might be why you don’t see me as someone angry and working out my demons onstage. It’s that I love the thing that I most wish had not happened.”

I love the thing that I most wish had not happened.

I asked him if he could help me understand that better, and he described a letter from Tolkien in response to a priest who had questioned whether Tolkien’s mythos was sufficiently doctrinaire, since it treated death not as a punishment for the sin of the fall but as a gift. “Tolkien says, in a letter back: ‘What punishments of God are not gifts?’ ” Colbert knocked his knuckles on the table. “ ‘What punishments of God are not gifts?’ ” he said again. His eyes were filled with tears. “So it would be ungrateful not to take everything with gratitude. It doesn’t mean you want it. I can hold both of those ideas in my head.”

He was 35, he said, before he could really feel the truth of that. He was walking down the street, and it “stopped me dead. I went, ‘Oh, I’m grateful. Oh, I feel terrible.’ I felt so guilty to be grateful. But I knew it was true.

There is a lot to look at here, but a few things jumped out at me right away.

I don’t know Stephen Colbert, but I don’t suspect that he is cynical about his faith or about talking about it. He strikes me as a thoughtful guy who does not participate in an interview without giving it some thought ahead of time. I also don’t think that his account in the interview above provides a full epistemological picture of his faith or anyone else’s for that matter. If that was the whole picture, then the faith would be flimsy indeed. But you can’t say everything when you say anything…

I think we do get a glimpse here of a way, effective in its own respect, of talking publicly about personal faith. We do well to stop, take note of it, and maybe learn a thing or two.