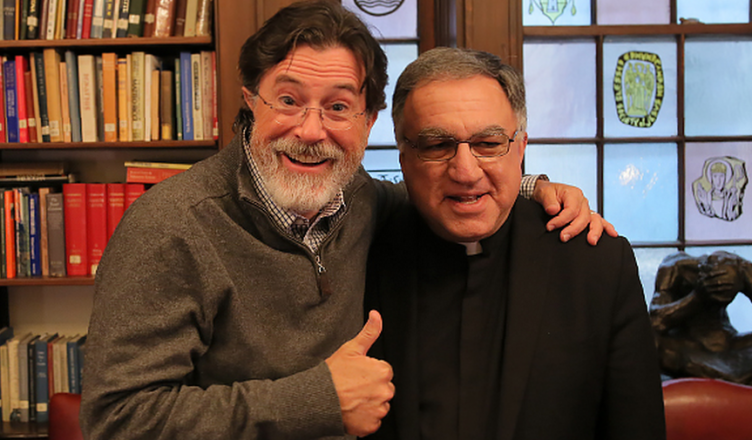 Stephen Colbert is talking about his faith again, this time with Father Thomas Rosica, the Vatican’s English language spokesman for the Holy See and CEO of Salt and Light Television. In the short clip below, taken from an interview that will air Sept. 13 on the show Witness, Colbert shows off some impressive philosophical chops by throwing out a casual mention of St. Anselm’s Ontological Argument, followed by a similarly casual description of said argument for God as “that than which nothing greater can be conceived.”

He then describes Anselm’s thinking as both flawlessly logical and “completely unsatisfying,” and of course he has a point, though not necessarily for the reasons he thinks. Anselm does fail to convince, but I don’t think logic is the reason for his failure. Colbert, however, does. Watch for yourself.

“Faith ultimately can’t be argued. Faith must be felt,” he argues.

Okay, that was a cheap shot, but it does get at the problem that arises with certain claims of feeling-based faith. Colbert’s reasons for believing are actually quite logical. He loves the world and feels grateful toward it (these are the same premises he mentioned in the GQ article from a couple of weeks ago), and as a result he chooses to direct that gratitude toward an entity he calls God. Judging by other interviews with Colbert, his faith extends beyond only this and actually takes on the contours of traditional Catholicism, but nevertheless here lies the foundation.

If he could be reached for comment, I suspect Anselm would say that he finds Colbert’s Gratitude Argument “completely unsatisfying,” but that does not make it illogical either.

There is a story in the gospel of John about the man healed of his blindness. When questioned by the authorities he claims a similarly experiential foundation for his faith. They cynically assert that Jesus is a sinner, to which the man responds, “Whether he is a sinner I do not know. One thing I do know, that though I was blind, now I see” (John 9:25).

Faith need not be predicated on abstract reasoning, but it is supremely sensible, which brings up another important point about the foundation of faith. Saving faith is conditioned upon the work of the Spirit bearing witness to Christ in the heart of the believer. Without the work of the Spirit regenerating the heart of the person, saving faith is out of the question. As a result, any defense of faith in Christ, whether through rationalistic or experiential pleading, will fall on deaf ears if it is not attended to by the Spirit of Christ.

In this sense, Colbert makes a legitimate assertion. Faith must come from the regenerate heart properly acknowledging the truth of the Scriptures’ teaching about Jesus Christ. Like an infant smiling when her mother enters the room, the heart’s acknowledgment of its savior can appear more as a feeling than a considered argument. In this way, faith must be felt.

As in the case of the child’s acknowlegment, however, we would hope that the inarticulate feeling will blossom into full-blown knowledge with maturity and learning.

So, now that we know Colbert’s critique of Anselm, perhaps some enterprising reporter could coax him into a discussion of Calvin.

6 thoughts on “Colbert on Faith: Logic Has Nothing to Do with It”