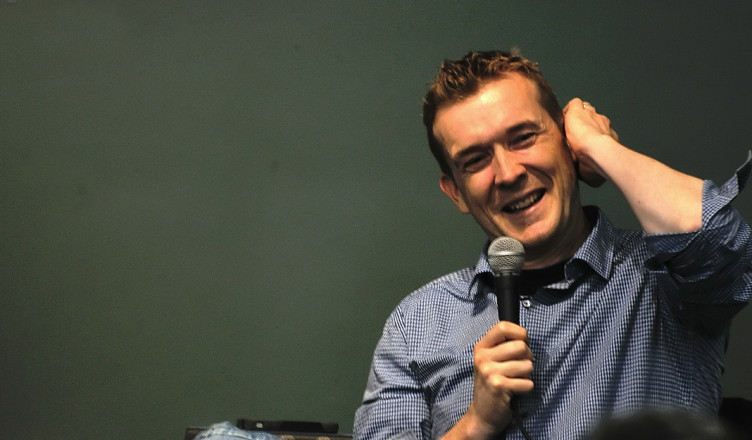 With his new book Slade House out, author David Mitchell has been getting some attention lately. Mitchell possesses the rare ability to discuss literature in a way that is accessible without being imprecise or dumbed down. He speaks of writing like a middle-schooler might speak of his comic book collection. He is relatable, mortal, but then you go and read his work and realize that you are not even close to the neighborhood of his imaginative spark.

In this Paris Review interview (“Art of Fiction, No 204”) Mitchell discusses his childhood, and how his interest in reading spawned a consequent interest in writing:

My father taught art at a teacher-training college before joining the design department of Royal Worcester Porcelain, where he worked on tableware and limited editions—I remember a series with famous American ships, which people might still be dining off in Omaha or Santa Cruz as we speak. Mum was a freelance artist specializing in botanical images used in advertising, packaging, and on greetings cards. When I talk about my artist parents people imagine a bohemian environment and think, Aha, so that’s where he gets it from! But we were as white, straight, and middle-class as the next family on our white, straight, middle-class housing estate. But my parents did show me, inadvertently, that earning a living off the back of an artistic talent is not impossible. And certainly there was no shortage of books in the house—Mum was always a big reader, and still is—and my childhood was a place where reading for pleasure was not weird. Also, my parents discovered they could shut me up for hours by mounting a large piece of cartridge paper on a drawing board—beautiful quality paper, a big beautiful snowy expanse—and leave me to draw, and name, maps of imaginary archipelagos and continents. Those maps, I think, were my protonovels. I was reading Tolkien, and it was the maps as much as the text that floated my boat. What was happening behind these mountains where Frodo and company never went? What about the town along the edge of the sea? What kind of people lived there? The empty spaces required me to turn anthropologist-creator.

On the topic of creativity and artfulness, Mitchell is uncomfortable with the pretension that usually accompanies such talk, but admits the process is a somewhat mystical.

Writing describes a range of activities, like farming. Plowing virgin fields—writing new scenes—demands freshness, but there’s also polishing to be done, fact-checking, character-autobiography writing, realigning the text after you’ve made a late decision that affects earlier passages—that kind of work can be done in the fifth, sixth, and seventh hours. Sometimes, at any hour, you can receive a gift—something that’s really tight and animate and so interesting that I forget the time until my long-suffering wife begins to drop noisy hints.

Some writers talk about getting into a zone, where things come in a rush.

Writers can sound rather mystical when they talk about these things. Words like inspiration and creativity I’m really rather suspicious of, though I can’t talk about my work for more than thirty seconds without deploying them myself. Sometimes I think that creativity is a matter of seeing, or stumbling over, unobvious similarities between things—like composing a fresh metaphor, but on a more complex scale. One night in Hiroshima it occurred to me that the moon behind a certain cloud formation looked very like a painkiller dissolving in a glass of water. I didn’t work toward that simile, it was simply there: I was mugged, as it were, by the similarity between these two very different things. Literary composition can be a similar process. The writer’s real world and the writer’s fictional world are compared, and these comparisons turned into text. But other times literary composition can be a plain old slog, and nothing to do with zones or inspiration. It’s world making and the peopling of those worlds, complete with time lines and heartache.

Another great discussion of Mitchell’s influences can be found in this talk from a recent book tour stop (for Bone Clocks) down the road from me at Politics and Prose. The whole thing is good, but you can check 54:40 to see where he discusses the influence of Lewis’s Chronicles of Narnia to his own writing.