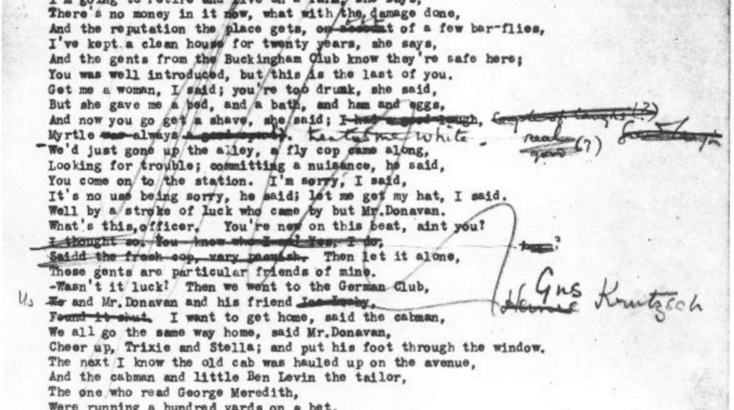 With the affected accent that is a blend of Received Pronunciation English and Boston Brahmins, Eliot reads his monumental poem “The Wasteland” as no one else, giving expression to the tension between the high modern sensibility and the eventual unraveling consciousness of the late modern mode. So much textual tissue was famously cut out by Ezra Pounds’ editing scalpel (see pic above of an original manuscript fragment), I can’t help but wonder if Eliot remembered the lost lines while reading and perhaps mourned them a little.

In a delightful and brief review in the Independent, Sally Gardner writes of the poem that it was a prescient bit of writing, an instance of the modern anticipating the postmodern and its technologically fueled sensuous manifold.

I have spent many a happy hour contemplating Madame Sosostris, and her wicked pack of cards, but here Eliot is the famous clairvoyante. This poem was first published in 1922; cinema was still in it infancy, there was no TV, no internet, no mobile phones. He foresaw the future for a teller of tales. Today many of the stories we share come to us through collages of paper and multimedia technologies, staccato snippets, interrupted trains of thought, tales from the babbling tower, broken images on the cutting-room floor. There is never the time to listen to one voice. Too many stories are shouting to be heard. All this and more is captured in ‘The Waste Land’. Eliot gives us a library of unfinished possibilities.

I think she is right. The Norton Anthology edition of “The Wasteland,” with its extensive annotation, shows the poem to be something like an early attempt at hypertexting, but instead of links to statistical studies and blogs, the reader finds sometimes subtle, sometimes not so subtle, links to the Western canon, back when people believed in such a thing.